André Delpech was born on the 1st of October 1924 at Origny-Sainte-Benoite in the North of France. His father was a Stationmaster and his mother was a primary school teacher.
After the declaration of war in 1939, Andre's father was ordered to close the station. With the 1940 armistice, his family decided to return to their ancestral land in the South West of France, in the Lot region, which was at this time in the French "free zone".

André pursued his scholarship as a boarder at the Lycée Gambetta in Cahors.

On the 11th of November 1942, when the Nazis invaded the French free zone, André decided to join the French Resistance. Son of a World War One serviceman and proud of his country, he could no longer watch France being destroyed by the Nazis; he had to do something! He enlisted in the « AS Veny » network thanks to one of his friends of the same age, René Vaissié, whose father was one of the leaders of the network. This network was the merger between « l'Armée Secrète » led by Général Delestraint, who later perished at Dachau, and a group formed by Colonel Vincent, nicknamed "Veny".
Simultaneously, André fulfilled his role as a messenger in the Resistance, operating between Toulouse and Cahors, and studying at Lycée Pierre de Fermat in Toulouse with the intention of sitting the competitive exam to enter officer training at Saint-Cyr Military Academy. As these pre-military studies were prohibited by the Nazis, the course was operated under the guise of being pre-business school studies in order to enter HEC Business School.
When he encountered problems in Toulouse, his resistant acts were concentrated in Cahors, where he held the position of supervisor at the Lycee Gambetta: propaganda, military training in off-road terrain, sabotage, ambush techniques...
His service record states that he entered the Resistance on 25 December 1942. He fought in the « Forces Françaises de l'Intérieur (FFI) » from 1 December 1943 until his arrest by the Gestapo on 17 May 1944. He had served as FFI Sub lieutenant since the 1st of May 1944.
Denounced and arrested in Cahors, along with his friend René Vaissié and his friend's father, he was incarcerated at the Saint-Michel Prison in Toulouse. On the 16th of June 1944, they were transported by train to the Royallieu transit camp, near Compiègne.
On the 2nd of July 1944, they left Compiègne for Dachau on the train known as "the death train ", n° 7909. Of the 2500 prisoners who departed from Compiègne, approximately 980 perished during the voyage. Most of the deaths, occurred on the first day of travel, because of a suffocating heat and the refusal of the Nazis to open the doors and provide water.
André arrived at Dachau on the 5th of July 1944 for a three-week "quarantine" period. His prisoner number was 76727. 1947. After that, he was sent to the Neckargerach Kommando, to work in the Obrigheim mine. His new matriculation number was 21354. 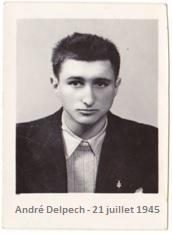 He was be liberated by the Americans the 5th of April 1945 in the vicinity of the village of Osterburken. He returned to France by his own means on the 20th of April 1945.
Remarkably thinner and weaker and suffering from tuberculosis, he was treated at the Cahors Hospital from 4 May to 10 June 1945. Following this, he stayed at the recovery center for political deportees in Luchon.
In November 1945, due to his service to the Resistance and his academic preparation, he was admitted to Saint-Cyr in the "Rome et Strasbourg "year group. He chose the specialty of "Transmissions" and ended his military career as a Lieutenant-General and Inspector-General of the French Army.
In 1991, he was elected President of the French Association of Dachau Concentration Camp. He remained President until 2011, when he decided to take a step back in favor of the next generation. He then became Honorary President. 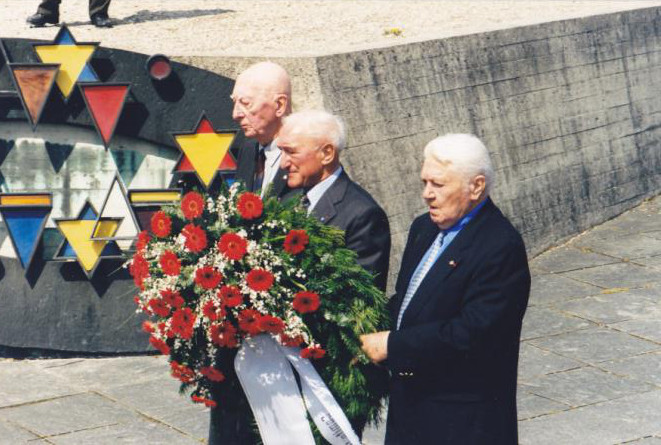 In 1991, he was also elected President of the International Committee of Dachau and served in this role until 2005, when he stepped aside from the presidency to make way for the next generation. He was recognized as Honorary President following this.He always defended tolerance and friendship between peoples, in order that the next generation wouldn't have to experience what he did. During his service, he worked to keep the memory alive for future generations.